Saturday the 31st of January saw the opening games of the IWLL. Galway hosted the game day in the Dangan sports facilities. Five games were held on the day with each team playing a minimum of 2 matches.

This game day was a great opportunity for the DALC ladies to shake off the rust from the Christmas break and get back into playing lacrosse. It was a very competitive day for the ladies who played matches against each of the other teams. The weather was very dramatic for the whole day ranging from sunshine to hailstone blizzards which made for difficult playing conditions.

The first match of the day saw the Avengers take on Galway. The friendly rivalry between these two teams made for the perfect opening match in the league. The new 8s format required some adjustments as players were not used to the short halves. Evanna called a time out “half way” through the first half to give the girls a few minutes rest, only to find that we were already 14 minutes into the 15 minute half… Having four less players on the pitch was also an adjustment for everyone as it meant everyone, bar one, was playing in a midfield position. So while there is less game time, it is clear that strong fitness is a necessity to perform well on a smaller team.

Galway’s draw control was very strong but the DALC ladies fought hard, especially in the second half. Dublin played very well together in this game with awesome teamwork and passing. We became stronger as a unit in the second half when we settled down and made a bunch of passes. This enabled players to cut into the middle and take good shots. By relaxing we were able to play a lot better. We made some nice plays leading to a few great goals. 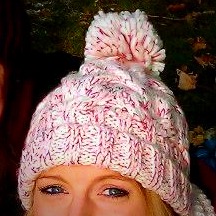 The match was well fought with ground ball hunger present throughout and we played hard until the end. Maria was always in a great spot for a pass, making good cuts and nailing her shots.

The highlight of this match was, without a doubt, a manoeuvre by Aoife Ferguson. While running down the field full speed, Aoife managed to simultaneously fling her hat off and dodge a check and came away still holding on to possession.

This was a great match with good quality lacrosse. We have seen what we need to work on and look forward to meeting Galway again so we can come away with the win!

The second match for the Avengers was against their main rivals UCD Blue. With UCD Blue having won the Women’s Newtownards’ Cup before Christmas, motivation is high for the Avengers to ensure they hold on to the IWLL title. This motivation encouraged us to come together as a team a lot better in this match. We were unlucky with the draw control and don’t feel the score reflected how we played. The strong rivalry between the teams often leads to more aggressive play but this match showed more sportsmanship than the last time we played. Hopefully this will be a trend for the future game days.

Aoife Ferguson was the only goal scorer for the match with one unassisted goal. Kate Gaitley made her debut as Dublin goal keeper (and potentially her last appearance!) and played brilliantly. She will regret showing her new skill as we will be hoping to have her in goals again in future! Our new addition to the team, Pamela, was fantastic. After mistakenly telling us how much she loves running she was immediately placed in midfield and didn’t disappoint. You would never guess she hadn’t played lacrosse in years! Defence was brilliant with Susan great on the slides as always.

The weather was particularly dramatic in this game requiring us to take a break so our goals wouldn’t blow away. Our survival instincts kicked in and the pitch became dotted with groups of huddling lacrosse penguins to keep warm.

The final game of the day was against UCD White. UCD white is made up mainly of rookies and so we went into the game with confidence. It is always a great game for Dublin to play as a team and try out new positions. Rebecca Headon moved to a midfield position and even took charge of the draw. She also tried out a new move where she casually walks along the sideline maintaining possession. Laura returned to goals for this match and similar to Aisling and Kate was great! 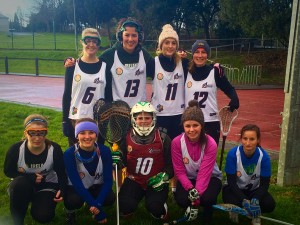 We were pleasantly surprised at how much the standard of the rookies has improved. In particular Emma Whelan has become a very strong player scoring both of their goals. We will go into our next match against UCD White with more caution as the players will have improved even further! While it is great to see them improve we don’t want them to get so good that they beat us next time round!

This was a good game for Dublin to settle the ball and work on good passing and looking for open players. Goals were scored by Aoife Ferguson (4), Maria Sheehy (2), Aisling Casey (2), Kate Gaitley (1), and Evanna Murphy (1). Maria scored a great goal after running the length of the pitch into full force hailstones while other players were struggling to see let alone score goals!

Player of the Game Day

The first winner for Player of the Game Day in the IWLL is…Evanna Murphy. She was selected by her team mates for the award. Evanna is in her second year with the Avengers. Here are some of the comments that her team mates had to say:

“her ground ball control was a thing of beauty!”

After the first game day the Avengers are in 3rd place. Galway and UCD Blue are tied in first place with a game in hand, but UCD Blue just lead the way on goal difference! It’s safe to say the next game day will be full of competition with everyone motivated to win their matches. With 19 games to go no one can say who will come out on top (we just know who we hope it is!)

The Avengers have started the league off getting on really well. When our heads are in the game we play well and make smart choices. Bring on the Valentine’s Game Day 🙂

One more sleep until we get to see everyone’s sm

After a long summer break training is back!! Sam

Such a pleasure playing @belleslax last night in t

We’ve had some gorgeous trainings the past coupl

It's that time of year, folks - the @dublinlacross

Check out that @dublinlacrosseclub presence on the


Error: API requests are being delayed for this account. New posts will not be retrieved.